Book Direct with the Owner at Tahune Airwalk Lodge in Geeveston with Kempsey Accommodation. Click on the Email or Call Now button to get your special price, talk with the owner to get a special price.

The Tahune AirWalk Lodge is located a 30-minute drive south of the Geeveston township in Southern Tasmania. Set amongst the tall trees of the southern forests around the Tahune Airwalk, ideal for all visitor's including families, school groups and backpackers. Accommodation includes three bedroom wings totalling eight rooms including two bunk rooms (each sleeps four), two family rooms with double and two single beds, two triple rooms with single bed and a set of bunks (each sleeps three) and two rooms with a double bed, accessible by wheelchair. The centrepiece of the complex is a central hub with fireplace, a television with a section of DVDs, books, newspaper, and free Wi-Fi, a dining area and a fully equipped kitchen with complimentary tea and coffee. Basic dining packs can be purchased at the cafe during opening hours (0900 till 1700). The shared bathroom facilities also cater for people with disabilities. Experience the attractions of the AirWalk site including the bird's eye view form the tree canopy. The Tahune AirWalk Lodge is approximately a 90-minute drive (89 km) from the capital city of Hobart. All Lodge guests need to check-in before 1600. 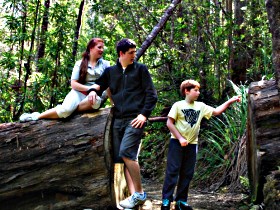 Kempsey Accommodation welcomes Tahune Airwalk Lodge, the ideal Geeveston TAS Holiday outlet for all the family to enjoy. We have made sure that we have thought of everything you would expect from your vacation with many features, click on the email or phone now button to get in touch with the owner.

Is Tahune Airwalk Lodge in Geeveston your property on Kempsey Accommodation, please claim your listing and subscribe to update your contact details and receive your phone calls and emails from your clients.